The 3D meshes you'll be rendering in a real world application will often share vertices between multiple triangles. This already happens even with something simple like drawing a rectangle:

Drawing a rectangle takes two triangles, which means that we need a vertex buffer with 6 vertices. The problem is that the data of two vertices needs to be duplicated resulting in 50% redundancy. It only gets worse with more complex meshes, where vertices are reused in an average number of 3 triangles. The solution to this problem is to use an index buffer.

An index buffer is essentially an array of pointers into the vertex buffer. It allows you to reorder the vertex data, and reuse existing data for multiple vertices. The illustration above demonstrates what the index buffer would look like for the rectangle if we have a vertex buffer containing each of the four unique vertices. The first three indices define the upper-right triangle and the last three indices define the vertices for the bottom-left triangle.

The top-left corner is red, top-right is green, bottom-right is blue and the bottom-left is white. We'll add a new array indices to represent the contents of the index buffer. It should match the indices in the illustration to draw the upper-right triangle and bottom-left triangle.

It is possible to use either uint16_t or uint32_t for your index buffer depending on the number of entries in vertices. We can stick to uint16_t for now because we're using less than 65535 unique vertices.

Just like the vertex data, the indices need to be uploaded into a VkBuffer for the GPU to be able to access them. Define two new class members to hold the resources for the index buffer:

The createIndexBuffer function that we'll add now is almost identical to createVertexBuffer:

There are only two notable differences. The bufferSize is now equal to the number of indices times the size of the index type, either uint16_t or uint32_t. The usage of the indexBuffer should be VK_BUFFER_USAGE_INDEX_BUFFER_BIT instead of VK_BUFFER_USAGE_VERTEX_BUFFER_BIT, which makes sense. Other than that, the process is exactly the same. We create a staging buffer to copy the contents of indices to and then copy it to the final device local index buffer.

The index buffer should be cleaned up at the end of the program, just like the vertex buffer:

Using an index buffer for drawing involves two changes to recordCommandBuffer. We first need to bind the index buffer, just like we did for the vertex buffer. The difference is that you can only have a single index buffer. It's unfortunately not possible to use different indices for each vertex attribute, so we do still have to completely duplicate vertex data even if just one attribute varies.

Just binding an index buffer doesn't change anything yet, we also need to change the drawing command to tell Vulkan to use the index buffer. Remove the vkCmdDraw line and replace it with vkCmdDrawIndexed:

Now run your program and you should see the following: 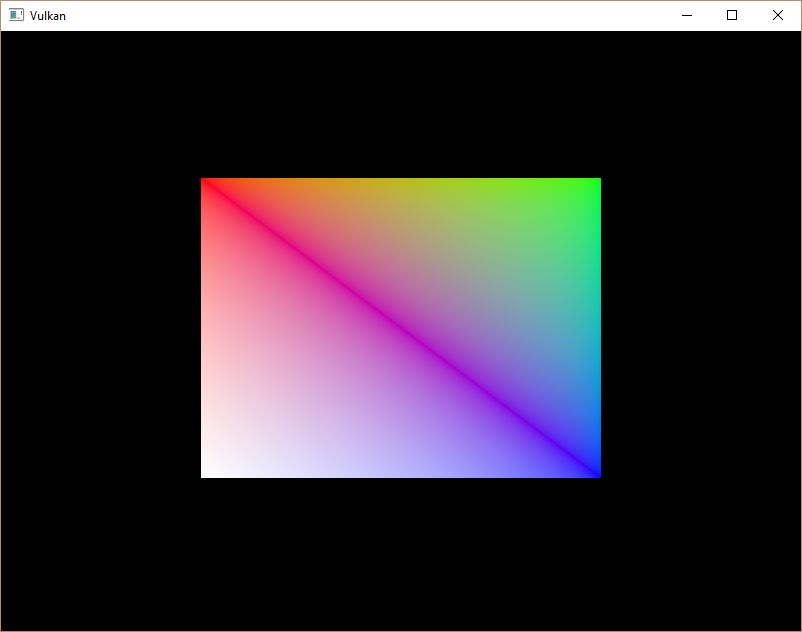 You now know how to save memory by reusing vertices with index buffers. This will become especially important in a future chapter where we're going to load complex 3D models.

The previous chapter already mentioned that you should allocate multiple resources like buffers from a single memory allocation, but in fact you should go a step further. Driver developers recommend that you also store multiple buffers, like the vertex and index buffer, into a single VkBuffer and use offsets in commands like vkCmdBindVertexBuffers. The advantage is that your data is more cache friendly in that case, because it's closer together. It is even possible to reuse the same chunk of memory for multiple resources if they are not used during the same render operations, provided that their data is refreshed, of course. This is known as aliasing and some Vulkan functions have explicit flags to specify that you want to do this.